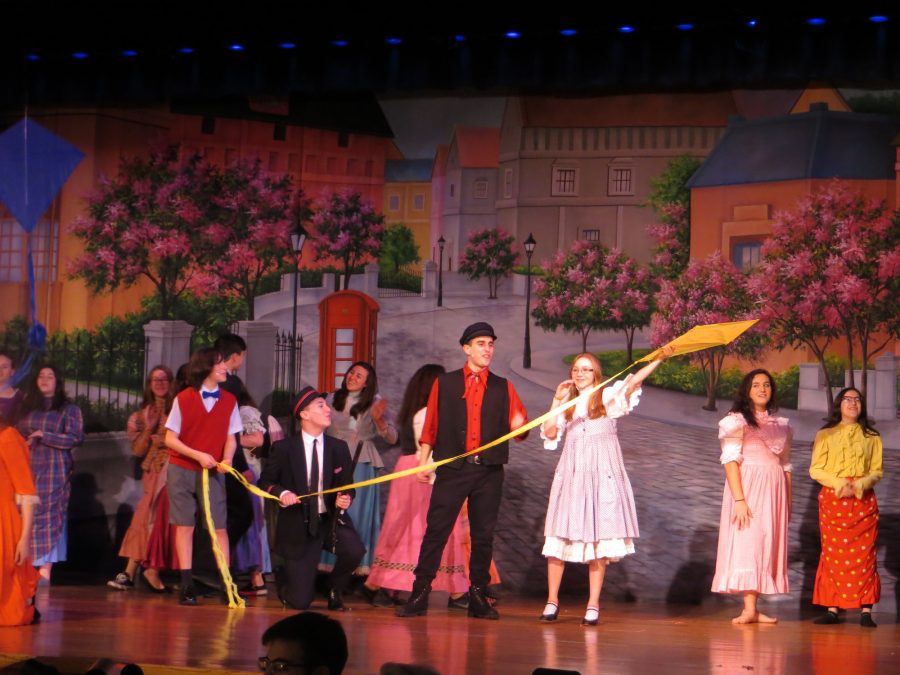 Hundreds of people filled the Baldwin auditorium onMarch 3 and 4 to watch the cast and crew of Mary Poppins put on a ‘supercalifragilisticexpialidocious’ performance.

The cast consisted of 68 students ranging from grades 9 through 12 and was directed by Ms. Kathryn Tauches. Lead actress and junior Alex Zografos was ecstatic when she found out she had been cast as Mary Poppins.

“This was my first time being the lead in the school [production], however I have had leads in shows I’ve done outside of school” she said. “At times, it was stressful knowing how big of a role I played, however it was such an amazing experience and I wouldn’t trade it for anything in the world.”

The story of Mary Poppins follows the Banks, a wealthy family that has gone through many nannies. George, played by Joseph Icart, and Winifred Banks, played by Renee Smestad, cannot get a lasting nanny for their out-of-control children, Michael and Jane.

Soon after their most recent nanny, Katie Nanna, played by Maria Leonardi, quits, Mary Poppins arrives to get the children in order. This is a magical component of the play because she claims she came due to an advertisement that George had previously destroyed.

There are many other magical events throughout the course of the show.  In one scene, Mary Poppins pulls various large items out of her purse that would not normally fit into her bag while singing the song ‘Practically Perfect’. Other songs expertly performed by talented MHS students include ‘Step in Time,’ ‘Jolly Holiday,’ ‘Supercalifragilisticexpialidocious,’ ‘Anything Can Happen’ in addition to many others.

The longer Mary Poppins stays, the better the children behave. They begin to behave better, and this is mostly because Poppins adds more fun and spontaneity in their lives; she introduces a spark of excitement into their previously dull lives.

She leaves for a short period of time and is replaced by George’s former nanny Miss Andrew, played by Bridget Rogers, who is a mean and terrifying woman. She treats the children horribly and does not have the same charismatic spirit that Mary Poppins does. Soon after the arrival of Miss Andrew, Mary Poppins makes a triumphant and long-awaited return, bringing the chaos comes to a close.

Other roles in the show that added a sense of comedy included the cook Mrs. Brill, played by Shannon Sullivan, and their odd-job man, Robertson Ay, played by Tyler Knabe.

Rehearsals for the musical started in January. At first, the actors rehearsed once or twice a week, but throughout February, they rehearsed every day from 3 p.m. to 5:30 p.m. During the week before the play, which is called tech week, students rehearsed from 4 p.m. until 10 p.m. Although it was exhausting, everyone involved agrees that it was worth it in the long run.

With six hour rehearsals, students needed to learn time management. “I would do as much homework as I could during rehearsal when I wasn’t on stage and then finish anything I had left after school when rehearsal ended,” sophomore and ensemble member Gabby Kovaluskie said.

The play could not have been such a success without the help of many people, such as the art students that built the sets, the stage crew, the lighting and sound technicians, and the pit musicians that set each scene with the appropriate mood.

The play could not have been such a success without the help of many people, such as the students in Drawing and Painting I and II and Technology, the stage crew, the lighting and sound technicians, and the pit musicians, who all brought the magical scenes of Mary Poppins to life.  According to sophomore Allana Potash, the stage crew made all set items and moved props during the changing of scenes.

Students working in the pit put in a tremendous amount of work as well. They attended rehearsal twice a week until they started practicing with the actors. The members of the pit also took on a major responsibility, learning long songs in a short amount of time.

“I played a bit of 24 songs during the course of the show,” sophomore and pianist Molly Guarton said.

Many students from Ames were a part of the show as well. Freshmen Sarah Benedict and Adam Koch played the lead roles of Jane and Michael Banks, who, along with many of the other actors, had been involved in past productions.

“Working in MHS was definitely different but I feel like the whole cast really helped us get through and made it much easier” freshman member of ensemble one Tom Angelone said.  The young actor played a chimney sweeper and a clerk/bank employee as well.

The show ended with the whole cast singing the song ‘Anything Can Happen’ and recapping the importance of the lessons taught by Mary Poppins. The song was harmonic and an emotional ending for the cast, especially on the night of March 4, the last showing.

All of the actors thoroughly enjoyed being part of the shows put on by MHS.

“The best part of being in the productions is seeing friends and people you don’t always talk to, and each year it’s like a reunion again.” sophomore Joseph Icart said.

Alex Zografos added that throughout the production, she learned about being a performer as much as a person. She made new friends and grew closer to the ones she already had, like many of the other cast members.

Congratulations to the students and staff for their fantastic work in Mary Poppins! Some would say it was a ‘practically perfect’ show. Everyone can’t wait to see what these talents have for MHS in the next production.