Bringing the NBA Back in a Bubble 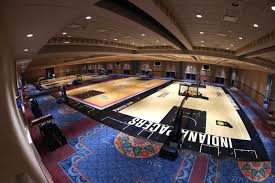 On March 11, 2020, the NBA world was flipped upside down. Utah Jazz center Rudy Gobert tested positive for Covid-19 just before tip-off for their game in Oklahoma City against the Thunder.

Chaos ensued immediately as fans were asked to leave the arena, and other games that were in process across the nation were stopped abruptly. The virus spread quickly amongst the NBA community, with the first player to test positive besides Gobert being his teammate Donovan Mitchell. Many more would follow, including stars such as Kevin Durant, Nikola Jokić, and Russell Westbrook.

NBA Commissioner Adam Silver was forced to decide on how to move forward with the league. The next day, he announced that the NBA season would be suspended for at least a month. During that month, the pandemic became more severe, and it became clear to Silver that he would need more than the month he initially allotted himself.

In early May, Silver held a call with some of the league’s top players and they started discussing ideas for how the season could continue. This plan featured what is referred to as “the bubble”:  twenty-two of the thirty NBA teams would resume play in one facility instead of each team playing in their home cities in order to reduce travel. The bubble was to be located at the ESPN Wide World of Sports Complex in the Walt Disney World Resort in Orlando, Florida.

Once there, teams were required to quarantine for two weeks at hotels near the campus, which they would also be staying at for the remainder of the season. Players, coaches, staff, media personnel, and everyone else in the bubble was tested frequently. If a player left the bubble for any reason, they would have to quarantine again and they could face a possible fine or even suspension.

Silver had now created a well-thought-out path to return, but he thought that competing in an empty gym would be strange for the players, and he wanted them to feel as comfortable as possible in such an unusual environment. To fix this, Silver added some finishing touches to the bubble, including virtual fans, arena sounds from video games to simulate crowd noise, and social justice messages on the courts, warmup shirts, and backs of jerseys.

When the season was stopped in March, most teams had only played about 65 games, so the playoff picture was starting to solidify, but it was not completely set in stone. Some of the top teams had already clinched a playoff spot, like the Milwaukee Bucks and the Los Angeles Lakers.

Other teams like the New Orleans Pelicans, Phoenix Suns, and Memphis Grizzlies were a few games back in the playoff race and were still fighting just to get into the postseason. Knowing this, Silver wanted to give teams that were on the brink of the playoffs a chance to still sneak in, since if the season was normal, they would be playing 10-15 more games and making a playoff push.

This led to adding eight “seeding games,” which would count towards a team’s regular–season record and help determine seeding for the postseason. After the seeding games, the NBA decided to try something new for the eighth and ninth place teams. A play-in game would occur only if the eighth and ninth seeds are separated by four games or less. This did not apply for the Eastern Conference this year, but the Western Conference featured an instantly classic play-in game between the Memphis Grizzlies and the Portland Trailblazers in which Portland prevailed.

After the playoff brackets were set for both conferences, the playoffs would proceed as usual. Despite the unorthodox circumstances, the postseason still produced memorable moments: multiple 50 point performances from both Donovan Mitchell and Jamal Murray, game-winning shots from Luka Dončić, O.G. Anunoby, and Anthony Davis, and shocking upsets like the Heat beating the Bucks and the Nuggets defeating the Clippers, both in the second round. Ultimately, the season concluded with the Los Angeles Lakers winning the championship, which was the perfect tribute to the late Kobe Bryant who passed away in January.

Now, reflecting on the season that ended in October, it is safe to say that the bubble experiment was an overwhelming success. Over the course of the four months that players were in the bubble, there were zero positive cases of Covid-19, which is an extremely impressive statistic in the world that we currently live in.

Everyone stayed safe and followed protocol, the players were satisfied, and fans got to experience one of the most strange, yet memorable postseasons in the history of basketball. Moving forward, the success of the NBA bubble poses an important question: is this what the future of sports will look like?

Different professional sports leagues have taken varied approaches to play through the pandemic. The WNBA conducted its entire season in a bubble in Florida as well, producing an identical result with zero positive Covid-19 cases (ABC News). Similarly to the NBA, the NHL resumed their season in multiple bubbles, with “hub cities” in Toronto, Edmonton, and Alberta. They also experienced success with the bubbles, seeing only two positive cases from a pool of almost 7,000 tests (ESPN).

Other leagues, like the MLB and the NFL, have not been as successful. Outbreaks of Covid-19 in both leagues has led to the postponing of games and has raised doubts as to whether or not it is safe for sports to be played during this time.

After an eventful offseason that landed many players on new teams, and a draft class filled with talented young players, the NBA is set for return on December 22. Opening day will feature multiple intriguing matchups, such as a battle for power in Los Angeles between the Lakers and the Clippers. The league will also continue its longstanding tradition of Christmas Day games, boasting a star-studded lineup of games all day long.

As expected, there have been some minor modifications to the way the season will play out. There will only be 72 regular season games as opposed to the typical 82, and All-Star Weekend has been cancelled, including events such as the Rising Stars Game, the fan-favorite Dunk Contest and the All-Star Game itself.

Of course, there will also be safety precautions to keep all the players and staff healthy through the pandemic. However, the league will not use a bubble like they did over the summer. Instead, teams will be travelling for their games, which will be played at the team’s usual arena, just without the presence of fans cheering them on in the stands.

No matter how the NBA season unfolds, it is safe to say that fans everywhere are extremely grateful for its return.