Massapequa Boys Soccer: Back on Top of Nassau County 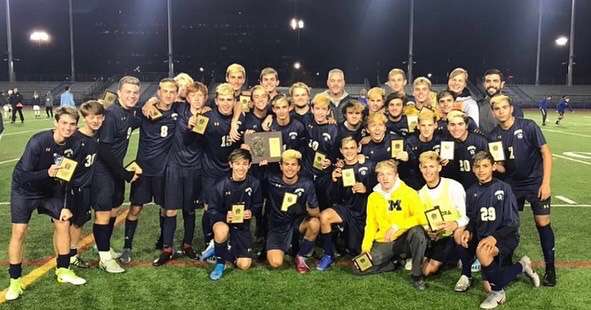 If the Boys Varsity Soccer team needed a major bounce back season, this year was the one. This season, the boys were looking for redemption as they made it all the way to the Nassau County Championship one season ago, losing to Port Washington. This year was a statement season, to show whether these gentlemen could maintain their dominance in Nassau County and be a contender for the Long Island Championship.

The boys started the year 4-0 and they eventually became conference champions with a 1-0 win at Uniondale on October 18, clinching the conference title and finishing the regular season with a record of 10-2-1. There was a stretch of time where the Chiefs suffered tough losses to teams like Port Washington and St.Anthony’s as they could not capitalize on their chances. Ever since a big 3-0 win vs Chaminade on October 6, the Chiefs turned things around towards the end of the regular season, finishing with an eight game winning streak to head into the playoffs as the number one seed.

“Our offense this year was so special because we all worked for and with each other. We all wanted to achieve the same goal. Our chemistry in the final third of the field really grew stronger as the season went on and that’s why we were so successful,” Boylan said.

The Chiefs also had a top notch defense this season, led by Owen McGarrity, Mike Savella, Connor Curran and Colin Mushorn. This defense gave up only 12 goals in the regular season, shutting opposing teams in every Nassau County playoff game, conceding no goals.

̈ The defense this year was brought to new heights because of the communication and chemistry throughout our players. Most of our defenders have been playing together since we were little and it only betters our connection as a whole,” McGarrity said.

The Chiefs defeated Uniondale 3-0 in the county final, getting revenge after a tough 1-0 loss in the final the year prior. The magical ride though ended when the boys lost 3-2 vs Brentwood in the Long Island Championship game.

Even though they were eliminated, the boys had an incredible season. This is a soccer team that is one of the best in Nassau, from losing in the county championship game one season ago, to now climbing back on top of the hill in Nassau County as county champs.

This year showed that Massapequa is a force to be reckoned with. The boys might be losing lots of seniors next year, but they still have a very strong team all around; on offense, defense and in goal. Don’t sleep on Massapequa, because when one does, a hefty price will be paid.