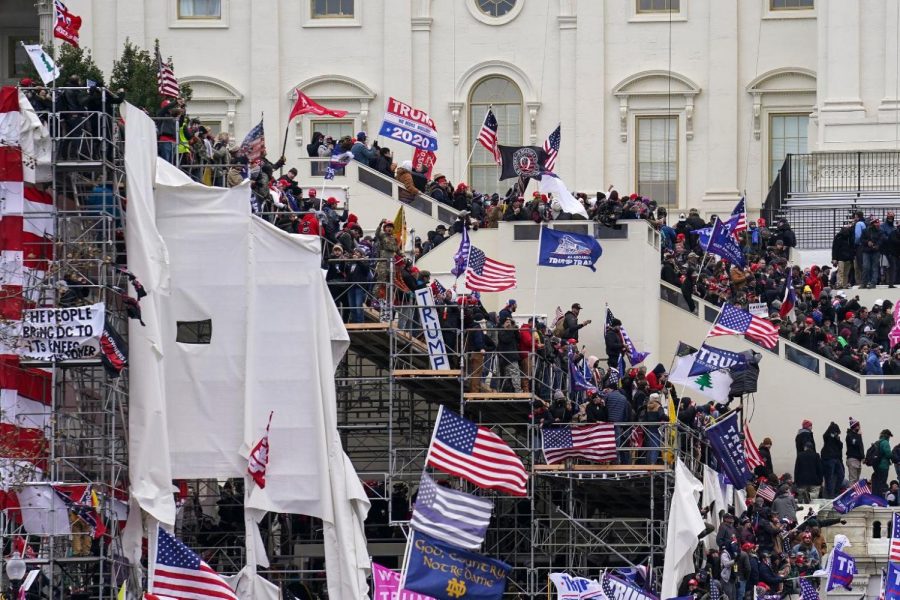 For hundreds of years, the United States has been united under the properties of life, liberty, and the pursuit of happiness. There were times of social reform, economic prosperity, and times of revolution, but nothing has ever been quite like these past few months.

America has known division since the birth of the nation and continued to create two large political parties which may inevitably lead to the fall of the country.

Moderates are astounded by the far left and far-right movements and the demonstrations over the past months, including The Capitol, storming on January 6, 2021.

With speculated voter fraud present in the 2020 election, Donald Trump called citizens to the United States Capitol Building to lay out evidence that had been found against him, including false ballots, unfair counting in other countries, and thousands of illegal votes from mail-in voting.

While many supporters were there intended to keep calm and quiet, after the electorate announced that President Trump’s information was not eligible for another audit, other people in the crowd began their own plans to storm the Capitol Building, which is considered a federal offense.

Infuriated by the outcome, protestors were climbing walls, and others were jumping over barricades.  Their actions all leaves one to wonder why the far-right reactionaries who earlier renounced violence at Black Lives Matter protests would become so violent now.

The protestors climbed up the East Stairs of the Capitol and knocked down the doors. Police rushed to keep the door shut but failed to do so. The windows began to shatter as protestors poured inside. President Trump tweeted encouraging the crowd to leave the Capitol as the Republican Party is the self-proclaimed party of law and order.

Property of the US Capitol Building was stolen including a speaking podium and rioters sat in speaker Nancy Pelosi’s office, taking electronics from Pelosi and other senators. Doors were ripped off their hinges and papers spewed on the floor. The National Guard was called after four people were shot by police. As of January 11, 82 people have been arrested and five people have died. One of which was a former air force veteran and one police officer.

The Republican Party moderates were astounded by their actions despite 84% of Republicans believing there were voting errors in the 2020 presidential election. 56 people were injured and five were killed, including an Air Force veteran and a police officer. Washington DC mayor Muriel Browser called a public emergency until the inauguration of Joe Biden.

Plenty of American citizens have taken to social media to voice their opinions after the protestors took on the capitol. Twitter was flooded with opinions from both the left and right sides, and Donald J. Trump’s account has been permanently suspended from its platform for being a “risk of further incitement of violence” along with other conservative handles. Additionally, many platforms such as Facebook, Instagram, and Snapchat have suspended Trump from sharing posts until Biden is officially the president.

Trump has acknowledged that he had lost the election and promises a “smooth, orderly, seamless transition of power.” He has also announced that he will not be attending the inauguration of President-Elect Joe Biden on January 20th. According to The Washington Post, he will be the first president to skip their successor’s inauguration in 152 years.

Massapequa Social Studies teachers made a great effort to speak about the importance of peaceful protest, and why they can become so violent in a world with so much pressure. “I felt like it wasn’t even real watching it happen like this is something that you read about in books or seen in movies, but it’s not something that should have happened no matter that amount of anger held,” said a senior at MHS.

Pelosi and many of her fellow members of the House of Representatives are now working to impeach Trump because they feel that he is no longer capable of running the country. People are urging Vice President Mike Pence to invoke the 25 Amendment. This says that if the President is incapable of doing his job, the Vice President will take over.

With uneasiness of the future of America’s factions, the rise of one party will lead to the reaction of another. As quoted by James Madison, “In a society under the forms of which the stronger faction can readily unite and oppress the weaker, anarchy may as truly be said to reign.”